pliny the younger at lucky baldwins 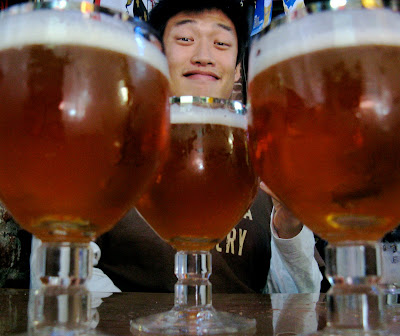 pliny the younger is a triple india pale ale made by russian river brewing in santa rosa, ca. for whatever reason, it has been taking the beer world by storm this year. it recently took over top spot as the highest rated beer at beeradvocate.com. production is so limited on this magical elixir that it has caused some havoc in the los angeles beer community.

on saturday we were able to track down the elusive beverage at lucky baldwin's in pasadena. we arrived early and staked out a table. servers started pouring pliny at 2pm, and a short twenty minutes later, their supply was finished. our table was fortunate to land three goblets of the stuff (my friend dave poses with in the above photo), and let me tell you, it was a delicious experience. i'm not sure that it deserves the best beer in the world title, but it certainly ranks right up there in my mind.
Posted by ben wideman at 12:01 AM

As a beer lover I really enjoyed reading this interesting story, especially as it had such a happy ending!

The younger was awesome! They tapped that gorgeous beer at 1:45 and when we stumbled away at 2:40, the fat lady was singing! I'm still buzzing the next morning and my pilsner loving friend says his mouth is still numb! Life is good!

What a great shot!

SO glad you got a few gulps of the elusive elixer, Ben. I love its name.

They also make Pliny the Elder which is a little more balanced and a fantastic beer as well.

Cafe the Wiser would ask, "How do you know you were really drinking, and paying for, Pliny the Younger - a beverage in such short supply?

I am completely jealous.