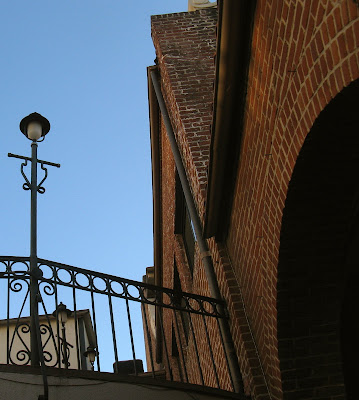 home of several businesses and restaurants, this pasadena location is tucked away just off of colorado blvd. i think it is worth the visit to check out its nooks and crannies.
Posted by ben wideman at 12:05 AM 1 comment:

what's playing at the laemmle? 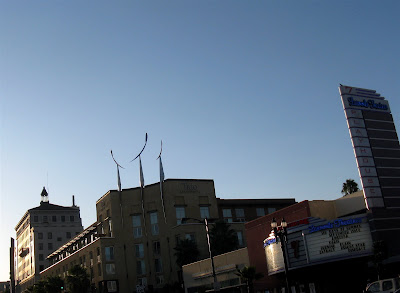 i always think the movies at the laemmle theater in pasadena look way more interesting than "normal" hollywood blockbusters. and yet more times than not, i find myself heading down the block for the much cheaper option.
Posted by ben wideman at 12:09 AM 2 comments: 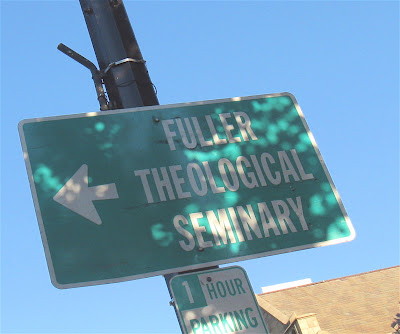 another summer has come and gone, and fuller seminary's fall quarter begins today. we're privileged that we get to wait this long, but that almost makes it harder to get back into the swing of things. this should be an interesting quarter - not only do i have some interesting classes, i'm also starting an internship at my church.
Posted by ben wideman at 12:04 AM 4 comments:

how did this happen? 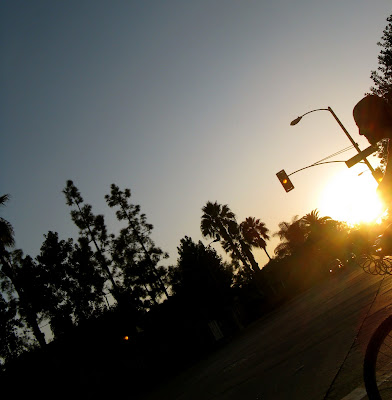 i don't really remember taking this photo. must have been an accident. but i sure do like how this little accident turned out!


by the way - "art smog" is a new area photo blog that was recently created by a friend of mine. check it out.
Posted by ben wideman at 12:06 AM 4 comments: 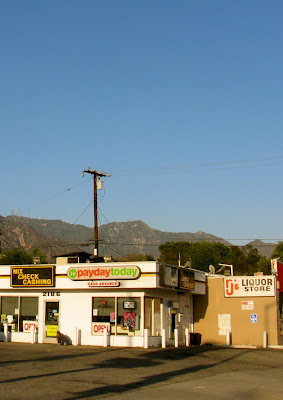 somewhat sad that the place to cash your paycheck is right next to the liquor store.
Posted by ben wideman at 12:05 AM 5 comments: 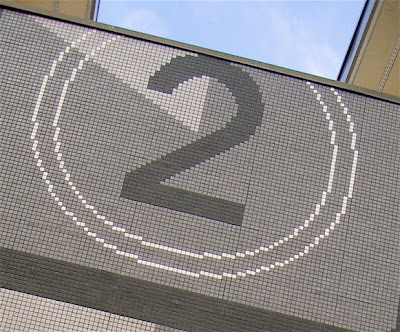 today marks two years since the creation of the sky is big in pasadena (an odd choice of first photo, don't you think?). this blog continues to be bigger than i ever imagined. while it may not have the largest following ever, each month brings new visitors and connects me with new people. i've been amazed that i ended up sticking with this idea for this long - what began as a side project during my first quarter at fuller seminary has changed into something i hope to stick with as long as we live in pasadena. as i said after year one, there continue to be some pictures that i'm really proud of, and some... not so much.

thank you all for your support!

a few stats from the first two years of posts:

photo request #24: cinema 21 in all its faded glory 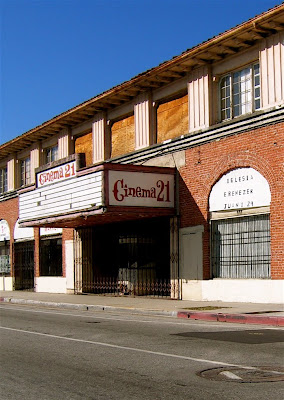 i love this old building. i wish i had the money to buy it and turn it into something trendy. this was an old photo request from my friend holly. her blog is fantastic - especially if you live in the davis, ca area. check it out!
Posted by ben wideman at 12:41 AM 7 comments: 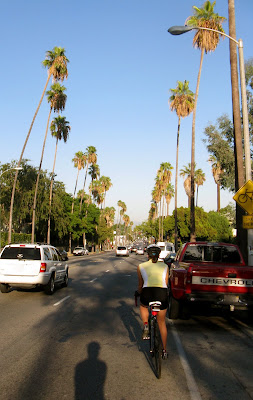 several of the streets of pasadena are lined with tall palm trees - which i've heard, lean toward the ocean. it's kind of unsettling, don't you think?
Posted by ben wideman at 12:32 AM No comments: 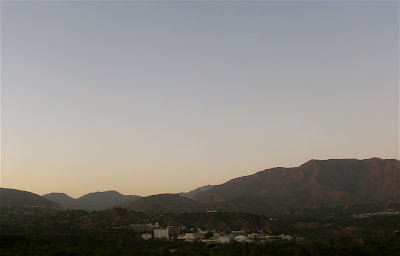 the jet propulsion laboratory sits in amongst the mountains - and as this photo demonstrates, looks much like its own city from a distance.
Posted by ben wideman at 12:16 AM No comments: 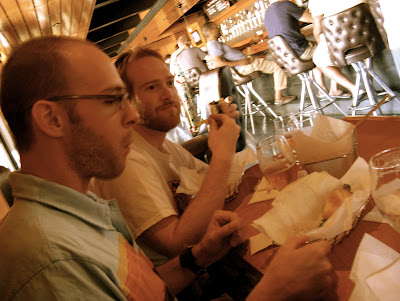 while their food and drink may be slightly overpriced, father's office has one of the tastiest burgers and best beer selections in l.a. county. and i do love burgers and beer...
Posted by ben wideman at 12:08 AM 3 comments: 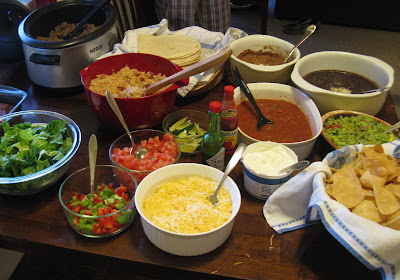 oh man, what a birthday. september 19th was good to me this year! the day began with a trip to the homebrewing store, lunch with friends, and a lovely bike ride. it concluded with plenty of good eats, lots of laughs, and of course - good friends. this photo is our fantastic build-your-own burrito birthday bar. i'm still full!
Posted by ben wideman at 12:13 AM 4 comments:

this photo needs a title 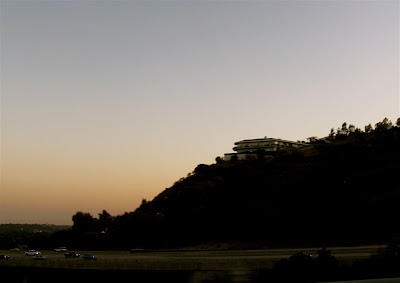 biking after the station fire 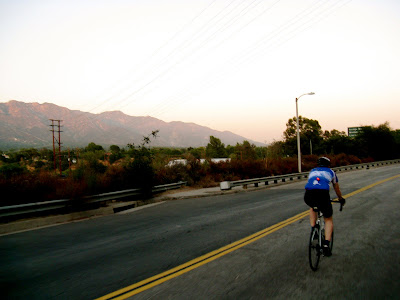 a few weeks ago, taking a long ride on our bicycles was out of the question. the air was so thick with smoke and ash that it occasionally looked like it was snowing on me when i rode my bike to work. we are happy that the smoke is gone and the sky is clear, yet we are also sad that this fire took our forest with it. this la times article and accompanying video is worth a look.

more skywatch friday can be found right here.
Posted by ben wideman at 12:01 AM 8 comments: 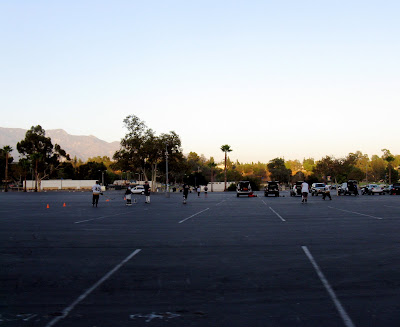 i snapped a picture of some people playing hockey - southern california style - over at the rose bowl. click on the image for a close up.
Posted by ben wideman at 12:31 AM 3 comments: 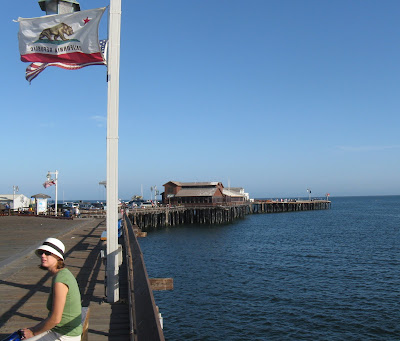 from a recent trip up the coast.
Posted by ben wideman at 12:05 AM 2 comments: 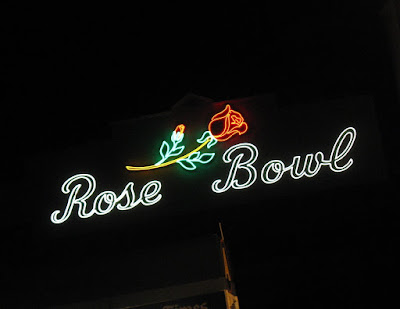 remember when i posted neon every friday? maybe i should bring that back...
Posted by ben wideman at 12:13 AM 3 comments:

i spy, something that is green 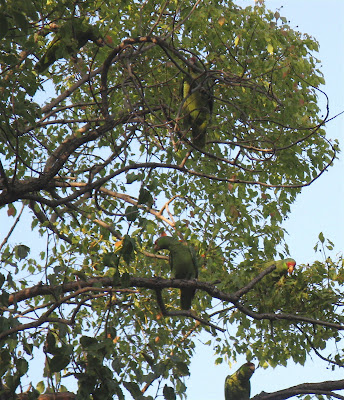 how many parrots do you count? this picture is from last year - but it just occurred to me that i haven't seen any parrots around since before the recent fires. could the two be coincidental? maybe it just isn't their season...
Posted by ben wideman at 12:30 AM 6 comments: 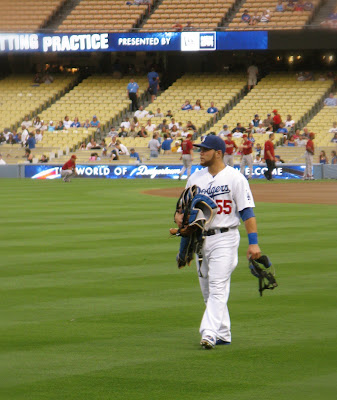 russell martin - fellow canadian - is by default, my favorite dodger. i started liking him well before we moved to la county and i began to adopt the dodgers as my national league team - simply because he plays for team canada. now i get to watch him up close - that is, whenever i go to dodger games.

the dodgers are right in the thick of a pennant race. they lead their division by a slim 3 games over the persistent colorado rockies. i'm hopeful that everything clicks at the right time this year and they bring the world series to los angeles. only time will tell!
Posted by ben wideman at 12:38 AM 6 comments:

have you been to diddy riese? 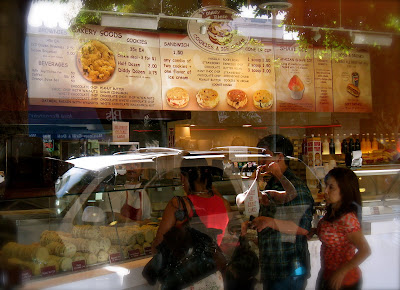 tucked away in ucla's westwood neighborhood, diddy riese is a sweet tooth's best friend. choose your favorite freshly baked cookie, your flavor of ice cream, and for $1.50 they will build a custom made ice cream sandwich. we feel that this is an essential stop when we show visiting friends and family around la county. i recommend the double chocolate walnut cookies with peanut butter ice cream. mmm....
Posted by ben wideman at 12:08 AM 6 comments:

highlights from our northwest trip: stanley park, vancouver, bc 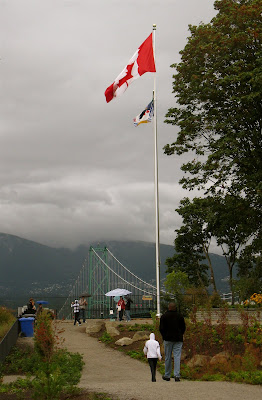 more skywatch friday can be found here.
Posted by ben wideman at 12:05 AM 8 comments: 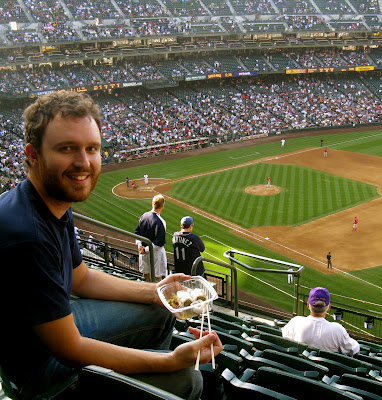 i got to cross one more ballpark off my lifetime list AND got to sample some ballpark sushi named after ichiro suzuki - the "ichi-roll" in case you were wondering. all in all, a pretty great day.
Posted by ben wideman at 12:14 AM 5 comments:

highlights from our northwest trip: burger from brunchbox 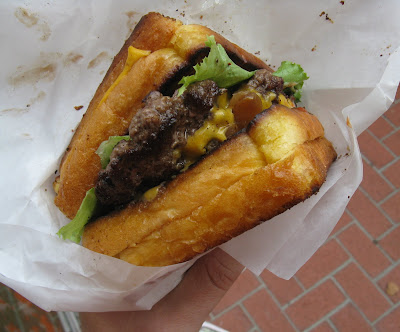 this amazing cuisine from one of portland's many food carts is born as a normal hamburger and transformed by substituting two grilled cheese sandwiches for the bun. AMAZING. if you are ever in portland, go visit brunchbox.
Posted by ben wideman at 12:06 AM 5 comments: 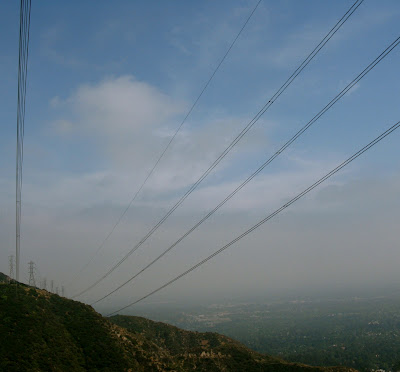 i'm happy to see that the smoke has been subdued somewhat. i have some pictures to share from our trip up north, but for now here is a shot from a hike we took earlier this summer at echo mountain - a part of our mountain range that has certainly been affected by the recent fires.
Posted by ben wideman at 1:06 AM 1 comment: 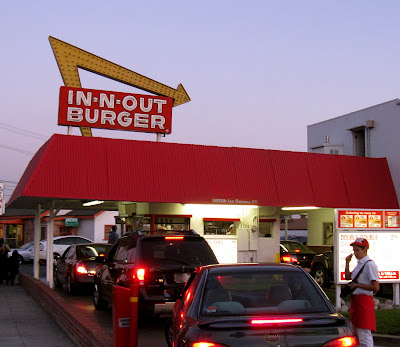 it may take a little longer, but i like the old school drive thru of the pasadena in-n-out location. a double-double with fries and a shake sounds good right about now.... mmm.

we fly back to l.a. today. we've really enjoyed our time in the northwest, but it will be good to be home. hopefully the smoke will have subdued since we were last in pasadena.
Posted by ben wideman at 12:15 AM 6 comments: 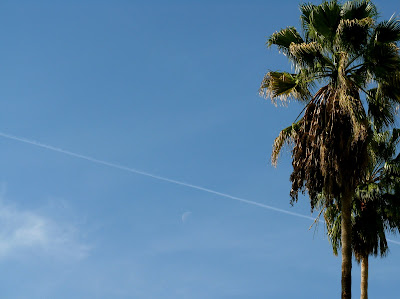 this week you get extra images of pasadena's lovely sky. the summer haze and the recent fires mean we don't always get such a clear view - this one is actually from last year, but i like it a lot.
Posted by ben wideman at 12:11 AM No comments:

checking in from the northwest 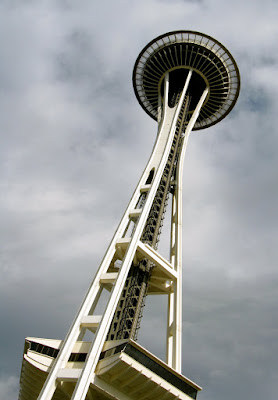 a classic shot of the space needle in seattle. we are now in portland and will be in vancouver tomorrow before flying home on monday.
Posted by ben wideman at 12:13 AM 3 comments: 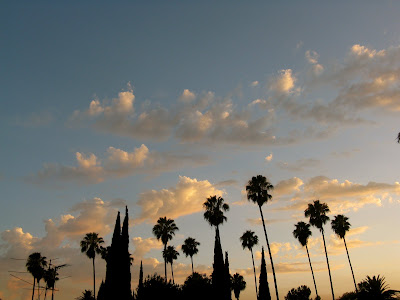 i took this one earlier this summer. it turned out really well and i was surprised to see that i hadn't posted it yet.

the station fire seems to be more contained every day. being on the road, i've gotten a little behind in updating my links page, but you can still read about it right here.
Posted by ben wideman at 12:02 AM 3 comments: 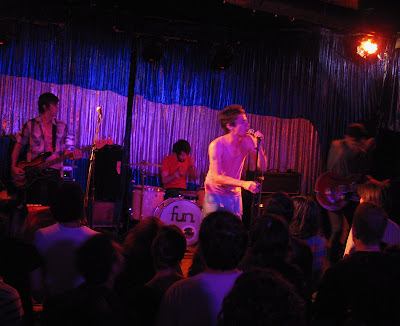 last monday night i ventured through the smoke to the spaceland club in silver lake for a free show (apparently a regular occurrence on monday nights). i was particularly excited to see 'fun.' perform. 'fun.' is made up of members of the band 'the format'. they put on an incredible show - especially considering it was free. their new album is streaming in its entirety on their myspace page. check it out!
Posted by ben wideman at 7:36 AM No comments: 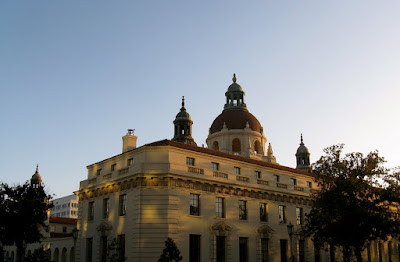 my wife recently told me that i have too many photos of city hall posted. but i really like how this one came out, so you are stuck with one more. you can see each one i've ever posted (and she's right, there are a lot) by clicking here.

we are heading out of town today for a trip to the pacific north west. we'll be traveling to seattle, portland, and vancouver before heading back home. we've never been to any of those places and we are very excited!
Posted by ben wideman at 12:07 AM 3 comments: 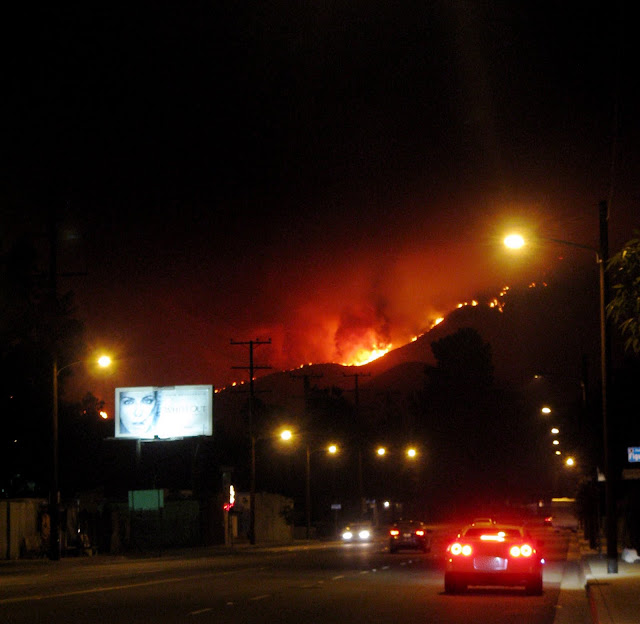 recent forest fires have been tormenting residents and the environment of l.a. county. these fires are big, and refuse to go away quietly. warm temperatures and extremely dry weather have created the perfect climate for fires to ignite. as of this post, the station fire is still lingering on our mountains.

i have been compiling a list of other bloggers working on this continuing news story. it can be found here.

hundreds of other city daily photo bloggers are working with today's theme.

Click here to view thumbnails for all participants
Posted by ben wideman at 12:01 AM 7 comments:

Email ThisBlogThis!Share to TwitterShare to FacebookShare to Pinterest
Labels: forest fire, la canada flintridge, la county, theme day
Newer Posts Older Posts Home
Subscribe to: Posts (Atom)
thanks for all of your support! unfortunately i have moved on from pasadena. photos were posted from 9-07 to 08-11.