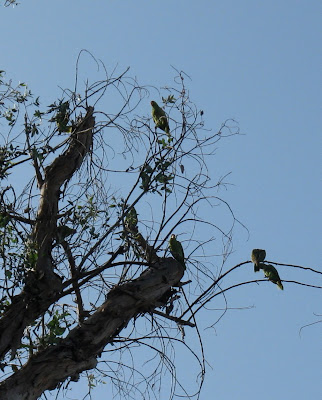 it was only a little while ago that i posted a blog wondering where the green parrots had gone. well that has dramatically changed, and we hear them and see them almost daily. and for whatever reason their numbers seem especially high this year.

Naturalized parrots are frequently seen and heard around Pasadena. According to local legend, many were released during a 1959 fire which destroyed Simpson's Gardenland and Bird Farm in Pasadena. Some of the parrots were probably pets that escaped or were set free. Some may have been released by smugglers attempting to avoid arrest. One common breed is the Red-crowned parrot.
Posted by ben wideman at 12:01 AM

Hi - just stumbled upon your blog. The parrots are out in full-force by our place. Their prehistoric squawks sure get us up in the morning!

For real! We've got a love/hate relationship - on the one hand they are noisy enough to drive you mad, but on the other hand, where else in the world can a flock of parrots drive you crazy?? Pretty amazing place we live in.

They fly south -- way south -- for the winter. It's nice to have them back, although they start squawking pretty darn early in the morning sometimes!

thought you might want to know about this bit of squak...
this from Waltrrrs blog 90042

Reyes Announces Free Express Bus Service to Dodger Games
Dodger fans can save time and money ($15 Stadium parking) by riding the free Dodger Stadium Express to the ball game. The service will run from Union Station to Dodger Stadium before, during and after games. The ride is free to fans who show the driver a ticket to that day’s game. Metro buses running on natural gas will shuttle between the locations every 10 minutes before game time, beginning 90 minutes prior to the first pitch until the third inning. The buses will run approximately every 30 minutes until the final out. The Dodger Stadium Express bus service begins April 1 with the Dodgers pre-game series.

Thanks, yep, I'd heard about that service starting up again!

there is a house for sale right under the tree of them, every day 5am and pm they are making extrem noises, i wonder that is why the propery is still for sale now