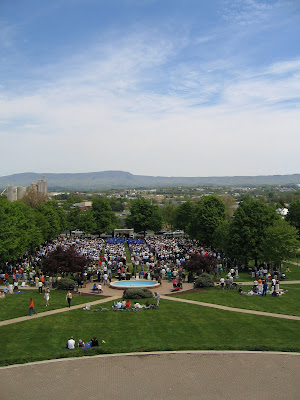 this photo was taken of an eastern mennonite university graduation ceremony a few years ago. why am i posting it today? well, emu's mens basketball team won their second round game last night to advance to the ncaa division iii sweet sixteen! i am extremely proud of my alma mater where basketball has never really been a strong suit. in fact, this is the first season the runnin' royals have been nationally ranked and advanced to the national tournament.

at the point this post was written, the location of their next game had not been decided - although there was an slim chance the game would be played in sunny southern california! that would be awesome.
Posted by ben wideman at 12:06 AM

Thanks Elizabeth. I think this is from '06