cd saturday: coldplay's viva la vida (or death and all his friends) 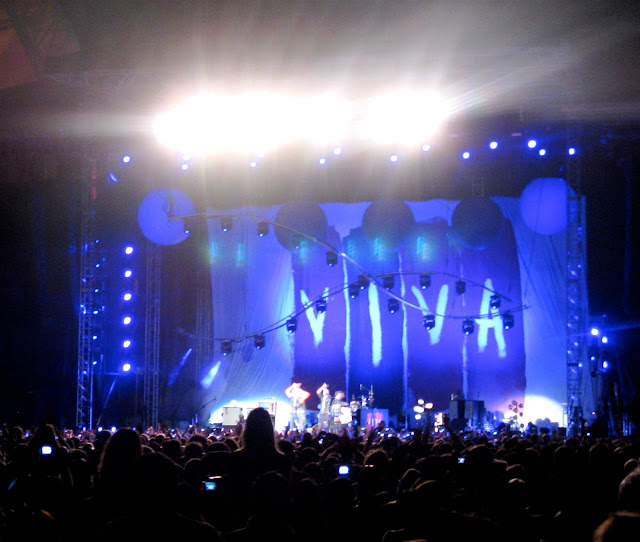 i loved this band for a long time.  i payed a ridiculous fee to a ticket scalper to see them on their first major north american tour.  i've been to every tour since then, including the recent tour for this album from which today's photo was taken.

this album might just be the band's best work.  coldplay's latest offering is just the candy my ears are hungry for - catchy melodies, minor keys, harmonies, unusual timing and rhythm, and a big ballad of a stadium anthem to end it all.

i'll admit it took a while to grow on me.  the first listen through - done online before the album was even released - was underwhelming.  it was a little too much of a diversion from their previous work.  it didn't have the same ring to it.  but every time i listened after that, i liked it more.  radio hits like "lost", "violet hill", and the title track, are all memorable, but some of my favorite tracks are the ones that did not receive as much attention.  tracks like "reign of love" and "death and all his friends" are some of the best songs i've heard in a very long time.  and have you seen the music video for "strawberry swing"???  awesome!

my one gripe about this recording was the bonus disc that was released a few months later.  i really enjoy many of the tracks on prospekt's march, the 8 song ep that followed viva, but it wasn't really new material.  several of the songs were simple remixes, and others - like the opening track, the lyric-less "life in technicolor", was re-released as "life in technicolor ii", and was expanded to be a full song.  i love this variation of the song.  why didn't the band just put it on the original album?  there are a few new songs, but again, why not just add them to the original packaging?  seems like a nice quick cash grab in my mind - especially for hard core fans who bought the original album, the prospekt's march ep, and the new packaged version of viva la vida that includes both discs.

never-the-less, this album is certainly worthy of my top 20.  if pushed, i might have to say that it is my current favorite album - or at least the one i listen to the most.

Pasadena Adjacent said...
This comment has been removed by the author.
2:17 PM